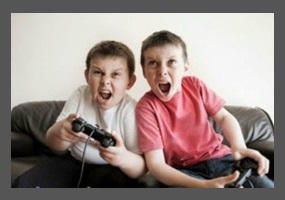 video games, Video game, video games ban, violent video games, Games
Do violent video games cause behavior problems?
25% Say Yes
75% Say No
Load More Arguments
Leave a comment...
(Maximum 900 words)
Anonymous says2013-02-26T20:28:04.333
Report Post
It depends who playing the games sometime people with mental problems it maybe change their behavior but normal people it shouldn't effect them
Anonymous says2013-03-06T17:54:57.743
Report Post
That's like saying that people just shouldn't play video games at all, if you're saying that they shouldn't play "violent" video games. Most games nowadays contain some sort of character violence. Yes, even those Mario games you may have used to play on your Nintendo 64, or currently, Wii U. For instance, those blue shell powerup/items in certain versions of Mario Kart can be used to "hurt" one's target, and also slow them down (it never killed them).

And anyway, I don't think we can blame video games on what sorts of things happen, like the Sandy Hook shooting, or the Aurora Theater shooting. Just as I believe that taking away guns completely won't benefit anyone. Keep in mind that some of the people behind theses things are more than likely mentally ill.
Anonymous says2013-03-22T13:30:29.363
Report Post
too much information!
Anonymous says2013-04-10T23:49:36.527
Report Post
It cant be the kids fault for playing these games its the parents fault for letting them play it in the first place
Anonymous says2013-04-12T02:24:18.527
Report Post
Why do people think thats it bad violonce causing peoples behaviour? Couldn't help eye cordinations or even improve their grades?
Anonymous says2013-05-20T15:48:18.597
Report Post
There is no such thing as normal..Parenting has everything to do with the parents and how they are teaching their children if they are even teaching them anything, like wrong from right, good from bad. If the children that are isolated start playing these violent games then they could also learn from those violent behaviors in the games because their parents havnt talked to them about it. Or if they even have those type of games in their home, they could go to friends houses and play violent games and come home with a bad attitude and violent behavior because they think its alright because their friends are acting that way, so it must be okay right? No, not at all. I think that all these violent video games affect the teenage brain to do so as they play.
Anonymous says2013-05-21T19:29:45.450
Report Post
I am 16 years of age, I have been playing GTA and Call Of Duty for a while, I am a kind and loving person and I always will be. I side with no because I have known my friends before and after they have been playing these games, they are perfectly fine. We also have a TAG Program (Talented and Gifted) And can you guess what I have observed? All the kids in that program (That are guys) play these games for hours on end. (there is also this one kid who gets mad really easily, but that's only because he has a very short fuse and his parents are the same way) Video games aren't to blame. The parents that raise the kids are.
Anonymous says2013-06-04T15:29:13.443
Report Post
I've been playing violent games since the age of 5. I have never gotten into a fight, never got into drugs, never even had detention. I graduate college, got a career in software engineering, and I'm fiscally responsible. I still play violent games to this day.
Quan says2013-06-05T18:47:12.937
Report Post
I think it's less about video games causing behavioural problems and more about existing behavioural problems being reflected in our choice of entertainment. Though even that may be going out on a limb. Virtually every one under 30 is regularly exposed to this kind of entertainment without exhibiting any unusually violent tendencies.
Anonymous says2013-06-10T09:54:15.097
Report Post
I feel that it depends on the child and whether they can distinguish between what is right and real and what is wrong and fake. If they can, then they can play all the horrible games and still understand that games are not reality, and not become aggressive.They may distance their mind from the emotions and thoughts they have when they play the games when they don't play them.
Anonymous says2013-09-06T08:13:50.603
Report Post
It depends on who is playing and the maturity of the child i know that many young children at my school are sensible enough to handle the violence of some games. However it also depends on how long the child is playing if they are addicted and the way they seem to behave in general.
Josh_b says2013-12-21T03:39:43.157
Report Post
Nobody want to hear that what they are doing is bad. Especially if the thing that they are doing is giving them encouragement. Gamers are winning achievements all the time, racking up mass points and honing their thumb skills. Big companies certainly enjoy people using their products and talking about them time and time again. Then there are still these huge amounts of people saying, "Hey, the behavior in that game is not right. Kids are acting more like the characters in the game- violent and disrespectful."

Well, who would want to listen that? Big time gamers say things like "Max Payne gives me achievements, I'll do what he wants me to do, I know where to draw the line, so he doesn't control my whole life. I can differentiate what he believes from what I believe." The next thing you know, the power of suggestion has kicked in and the old belief system is intermingled with the unwanted belief system and the brain can no longer differentiate whose beliefs are whose and the player personifies all of the beliefs in his daily life. People on the outside aren't affected by the abnormal belief systems, they just recognize the behavioral shifts of the players. Occums Razor teaches us to find the simplest cause and deem it the most likely. Parents notice this change happens consistently when certain video games are played, and they quit letting their kids play those games. That should be enough right? Parent intervention. But what about the kids who don't have parents that are controlling and dominating in their life? What happens to them? Do they just have to grow up and blame society because that's what society taught them?

If you are one of those people who say, "I'm not affected by it," I encourage you to take a poll from your close friends concerning your behavior. Alcoholics are identified by their peers long before they are willing to admit it themselves. Please, keep that in mind when you ask your friends and take what they say seriously. It could change your life, but if they say your fine, well congratulations it really doesn't affect you.
spiderman12345 says2014-01-29T19:04:05.270
Report Post
Omg stop believing in the news the news just blames video games
FISHFISHFISH36 says2015-09-24T09:17:57.087
Report Post
Asdfghjklcc 4567-= 235 3y fhgsdfjb hdgf kh gfhjgdfjkfsdy ygfhy gyugf ygayugaysdgf yagfyagfy8gay6fat gfayu tgyogfu
Privacy Policy | Terms of Use
Sitemap | View Desktop Version
©2022 Debate.org. All rights reserved.