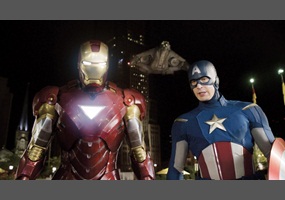 Avenger, Captain America, Batman, Iron Man
Is Iron Man better than Captain America?
55% Say Yes
45% Say No
Load More Arguments
Leave a comment...
(Maximum 900 words)
beizanten says2014-05-04T09:01:40.240
Report Post
Iron Man is better than captain america. I mean I agree steve is a great man with a great personality but his power was underwhelming compare to most superhero and villain.

Tony stark a great man. People blame him for making weapon but the truth is the only reason he make weapon is to protect american, obie is the one who dealing under the table. Tony blame himself when his only mistake is that he trust his father figure to much. He risk his life over and over again.

He did more than any avengers even steve, he make weapon and armor for them, donate money to help people-even when he sell weapon the maria stark foundation did a lot of good- he sponsor the avenger and upgrade shield equipment. He work hard to fund the avenger. Then there is the clean energy thing
Privacy Policy | Terms of Use
Sitemap | View Desktop Version
©2022 Debate.org. All rights reserved.