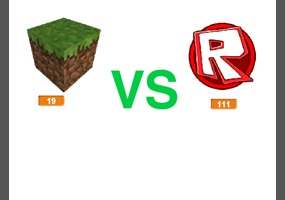 Is Roblox better than Minecraft?

Asked by: Lightsabermark
Games, Action, Roblox
Is Roblox better than Minecraft?
63% Say Yes
37% Say No
Load More Arguments
Leave a comment...
(Maximum 900 words)
Donderpants says2015-06-22T07:11:49.650
Report Post
Gah! A bunch of people accidentally went on the wrong side of the argument! I think it seems that as half the people in "Yes" are actually supporting the "No" point, "No" is actually winning here.
Privacy Policy | Terms of Use
Sitemap | View Desktop Version
©2022 Debate.org. All rights reserved.