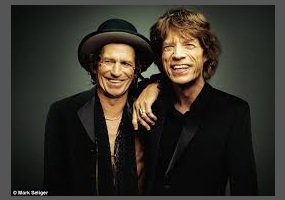 Mick Jagger and Kieth Richards met at a train station. Are these kinds of random meetings important?