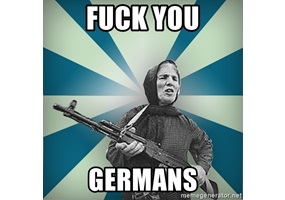 Nowadays, Do you think we should start a war against Germany again?