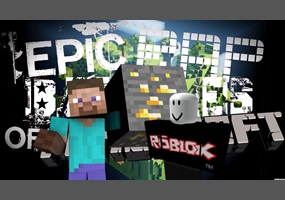 Roblox vs minecraft choose which is better. Yes for roblox no for minecraft

Asked by: jdudeace
Roblox vs minecraft choose which is better. Yes for roblox no for minecraft
55% Say Yes
45% Say No
Load More Arguments
Leave a comment...
(Maximum 900 words)
GetMeReported says2017-02-03T17:28:48.250
Report Post
First of all, let me start out by saying the that the person who made this debate does not understand how to make a proper debate. It has the ERB symbol in the back (like wtf?) and they made it a Yes or No debate, which is not grammatically correct to the question. Now, let me start my actual content: I'll give it to you straight forward. These two games are both stupid games that people with no lives play. Roblox is for unfortunate, unprivileged, 69 year old pedophilic individuals who obviously think that they are "cool" by playing this. This game is for people that cannot afford Minecraft. Having a variety of games does not mean that each game is good, in fact every Roblox game is just another rip off of another game. Have you ever heard of the expression "Putting lipstick on a pig"? That pretty much describes Roblox. People think that they can become "famous" by buying crappy virtual clothes and making games with horrible graphics. The creator of this game is obviously an autistic epileptic by thinking that they made a "fun" website for "kids" to play, even though the only people that play are grown men and women who only play to bully kids and online date, and little 5 year olds who have no knowledge of what grammar is except for "LOLOLOLOL". These people are fools falling into traps, but if they are so foolish, I think they should fall in these traps and die too.

Minecraft is just a rip off of Roblox except only addicted, sketchy 10 year olds will play. The people that play think that Roblox is way under their level, even though in truth, they both suck equally. I actually feel bad for any morons who play this because it is filled with homosexual racist bastards. Playing a block game doesn't make you look cool. Your "Steve" looks like a demented robot cow on steroids. You guys have no friends, that's why you have the "Singleplayer" mode. The graphics don't impress me and neither do the usernames of the players.
Privacy Policy | Terms of Use
Sitemap | View Desktop Version
©2022 Debate.org. All rights reserved.