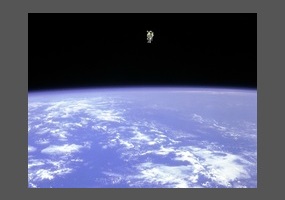 space exploration, United States, Space, Technology, NASA
Should America continue spending money on NASA?
72% Say Yes
28% Say No
Load More Arguments
Leave a comment...
(Maximum 900 words)
Anonymous says2013-02-28T21:00:19.143
Report Post
If we pay all our money on nasa we won't have any money left to pay our bills and taxes.
Anonymous says2013-03-01T18:42:08.843
Report Post
we always have enough money for things but the government wants to have control of everything and not let us the people choose whats right for this country.
Anonymous says2013-03-17T06:24:19.287
Report Post
I'm always hearing how all these great inventions have come as a result of NASA funding..
so why not just fund them to invent things, instead of going into space (which hasn't worked a fraction as well)
Anonymous says2013-03-27T16:20:15.663
Report Post
One half of one percent of the Federal budget. It's peanuts. Only relgious nuts and the ignorant and uneducated would want to defund NASA.
Anonymous says2013-04-07T15:16:59.667
Report Post
The US used to have a space program. Now Russia is the only country with a space program.
NASA provides us with knowledge, science, and dreams. Continue funding to NASA.
Anonymous says2013-04-11T15:15:29.647
Report Post
For the very first comment, that honestly makes no sense at all. We will have enough money for bills and taxes. We don't even really pay that much for the funding of NASA its a half of a cent of every tax dollar. And you don't have any problems getting by now. Most people probably don't even realize it.
Anonymous says2013-04-12T03:39:21.890
Report Post
Take a moment and think of things that have been invented or improved upon in the past 20 years. Anything you think of more than likely NASA has contributed. The aquarium in your living room, the glass could have been strengthened by new technology. Cell phones aren't possible without NASA. Velcro, say goodbye to that if NASA wasn't here. Goodbye safety, your airplanes just got more dangerous if you take NASA out of the US. Look at the hospitals even cat scans were developed through NASA. The ear thermometer was invented too. Comfort is another thing. Shoe insoles were improved upon and also was memory foam. The funding isn't there anymore. Say goodbye to the amazing inventions of the future.
Anonymous says2013-05-03T23:27:22.610
Report Post
USA should fund NASA because it has done more than 182 missions with only 3 failures over the past 58 years. Some of you say that the federal govt will save the poor and homeless if they had money. You don't know USA if you say this because USA would use this 0.5% of their annual expenses to make their military stronger. I don't see a correlation between stronger military and less poor people. But I do see a correlation between stronger military and more killed humans.
Anonymous says2013-05-13T00:56:41.110
Report Post
A popular misconception about NASA is that it is a very costly program that focuses solely on space; however, this is far from the truth. As of today, NASA’s funding accounts for less than one half of one percent of the federal budget; and while still underfunded, it has produced a variety of technological advances ranging from LEDs to artificial limbs. Furthermore, new technological advances, if funded, will stimulate desperately-needed economic growth in the nation.

NASA has, for decades, stimulated the young minds of future scientists and engineers, encouraging them to not only dream of tomorrow, but to create it as well.

This petition is a start: wh.Gov/t0k6
theta_pinch says2013-12-28T16:55:29.550
Report Post
Absolutely every negative vote is because "it wastes so much money." This is one of the most ignorant statements possible; NASA gets 0.48% of the budget; less than half a percent! The military gets more than 120 times that amount. Cutting NASA won't do anything! NASA only gets half a penny for every tax dollar. That half a penny is not going to make any difference at all in anyone's life!
theta_pinch says2013-12-28T16:57:59.477
Report Post
Also here's a link to the stuff they invented that is now being used by a lot of people: http://en.wikipedia.org/wiki/NASA_spin-off_technologies
theta_pinch says2014-02-03T00:28:52.030
Report Post
The ignorance being shown here is appalling.
Monkeeboy_830 says2017-04-10T15:08:35.273
Report Post
Some of you are correct then you are also incorrect for we have so much money that we do not have to spend it all on just NASA but then we will also not be able to support our army.
Privacy Policy | Terms of Use
Sitemap | View Desktop Version
©2022 Debate.org. All rights reserved.