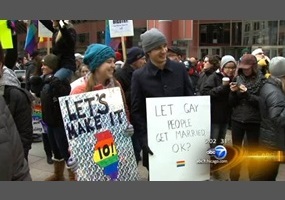 Should gay marriage be legalized?

gay marriage, Same-sex marriage, United States, same sex marriage, Marriage
Read more: http://abcnews.go.com/US/catholic-school-adm...
Should gay marriage be legalized?
77% Say Yes
23% Say No
Load More Arguments
Leave a comment...
(Maximum 900 words)
Anonymous says2013-03-21T14:23:33.843
Report Post
I say that they should legalize it let people love thats what is wrong with our country now people dont want to love other people and then dont want to let other people love each other. if they are let them be happy there is so much hate in this world now man come on i'm a straight 15 year old and i think that gay marriage should be legalized stop all the hate and love
Anonymous says2013-03-22T04:50:50.503
Report Post
mar·riage [mar-ij] Show IPA
noun
1.
a.
the social institution under which a man and woman establish their decision to live as husband and wife by legal commitments, religious ceremonies, etc. Antonyms: separation.
b.
a similar institution involving partners of the same gender: gay marriage.
It says "similar" sim·i·lar [sim-uh-ler] Show IPA
adjective
1.
having a likeness or resemblance, especially in a general way: two similar houses.
2.
Geometry . (of figures) having the same shape; having corresponding sides proportional and corresponding angles equal: similar triangles.
3.
Mathematics . (of two square matrices) related by means of a similarity transformation.
Where did the liberals responsible for creating a society with no limitations nor boundaries get the idea that gay marriage are hurting us. First we are not opposed to some civil legal commitment go ahead, but do not call it marriage make similar but do not make it the same. It is for a reason that men were born man and women are also born women. Everything in this universe follows an order, call it creation or evolution as it best suits you but everything follows an order of things. Do not compare it with the black people fighting for the rights to become a person ... next time someone will want to marry an animal or may be a corpse and that will also be taken as discrimination.
Anonymous says2013-03-27T13:50:17.803
Report Post
No gay marriage its gay it was adam and eve not adam and steve!!!!!!!!
Anonymous says2013-04-01T12:56:29.857
Report Post
I don't think it is the government choice in who people should married. I think we can decided ourselve we dont need anybody else help. They are making sound like can control our lives. They have better things to fix than worrying about who people marry when they can be getting there debt cleared..
Anonymous says2013-04-02T17:44:57.290
Report Post
As probably noted before marriage is a legal contract free of any religious influence, Holy Matrimony is what has to do with religion. If Gay Marriage offends your religion all laws should. Making Holy Matrimony of Gay people illegal would be more appropriate. So STFU
Anonymous says2013-04-04T01:29:13.130
Report Post
I think it shpuld cause usa is afree country peps are allowed to live therete life they want it lived i think iys stupid theres nothing wronge with it all yall saying no blaa blaa this and taht yall are being races againgst it are streo type god made us all difent we all have differnt belifes god wouldnt of put those peplo on earth if they wenrmt meant to do somthing about it i jope it will be leggaliz
Anonymous says2013-04-09T06:34:50.580
Report Post
Gay marriage is just a proof of statement of love between 2 men or 2 women who are showing love to each other and create a real family as other heterosexual couples. So why do we prohibit them from doing that? Which means we do not promote the equality as civil right that has been a movement in the past till now?
Anonymous says2013-04-17T14:53:55.340
Report Post
Gays don't choose to be gays? Is just the same as people not choosing to be a male or a female.So please just let them be and let them get married to the person they love.
Anonymous says2013-04-29T17:05:38.873
Report Post
Gay marriage should be legalized because there are legal advantages of being married, the rate of adoptions will increase, and children with married parents are better off growing up.