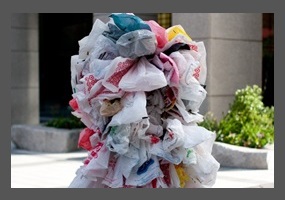 Should plastic bags be banned from grocery stores?

Business, Plastic bag
Should plastic bags be banned from grocery stores?
66% Say Yes
34% Say No
Load More Arguments
Leave a comment...
(Maximum 900 words)
Anonymous says2013-04-02T19:44:26.357
Report Post
No date of publication either, you guys need to get with the program
Anonymous says2013-04-26T21:20:09.040
Report Post
I'll keep my plastic bags, you can keep getting sick.
Anonymous says2013-04-28T20:45:48.330
Report Post
They should because it takes over 20 years for one plastic bag to decompose. Do we really want to wait this long for a single bag. Plus theres so much we could do with cotton bags like put our own designd on our bags. We could have fun whil helping our economy. So why not reach out a little and keep the world goin' round?
Anonymous says2013-05-21T02:36:32.407
Report Post
They have to be banned
haha123 says2014-02-20T13:38:28.190
Report Post
I think plastic bags should not be banned, picture this, all the plastic bags that were just produced are going to waste and where do we dump it the sea or the city dumps, there is another solution, burning them, even though it is a good idea, but there is a problem who cares about the environment then. Everyone says that plastic bags can destroy public property, then why don't you ban cooking, cooking does harm too. Plastic bags can be reduced, reused and recycled, only if people have a habit of doing that. Okay, lets put it this, what materials are you going to use instead of plastic? Paper (that will lead to deforestation), Rubber (that will not be ideal for your food), Metal (it is heavy and will rust) etc. There is no other solution to end this. Have you also think of the cause it will make when workers working in supermarkets would feel. Most of their extra wage comes from plastic bags, for example: plastic bags cost for 0.5 USD, pretend there is an average of 10,000 customers entering every day, that would be 5,000 USD already, if the supermarket only as 50 workers, each of them will get 500 USD each extra. Lets say this lasted for a non-leap year, that would be 182,500 USD extra for each worker a year, this profit could end up saving children in poor countries, helping poor families stay alive, saving people on the streets, that way everyone could be safe and sound without a problem. The world would be very peaceful according to this procedure, so i am keen on my suggestion that we should not ban plastic bags from grocery stores!
Privacy Policy | Terms of Use
Sitemap | View Desktop Version
©2022 Debate.org. All rights reserved.