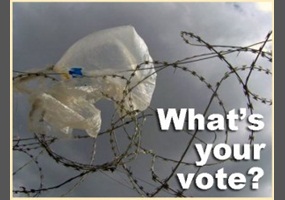 Should we ban plastic bags?

Asked by: KhaSan1
Plastic, European Union, Plastic bag
Should we ban plastic bags?
70% Say Yes
30% Say No
Load More Arguments
Leave a comment...
(Maximum 900 words)
SpicyPisces01 says2018-02-18T12:07:33.923
Report Post
If you say plastic is bad for environment so you're wrong !! WHY ?? Cause plastic didn't went there on its own it's the people who just aren't sophisticated to throw them in the dustbin or recycle them. They even might compare this to paper and say it will decompose if there aren't literate. A clear to the point example can be with electricity.... If there is an increase in incident like short circuit we won't ban electricity but we would be going to look why it happened and how to prevent it. Plastic is really helpful but the people are acting illiterate and throwing them here and there. This is not even just carried by illiterate but literate too you can notice it in morden city's and even your homes as well.
Privacy Policy | Terms of Use
Sitemap | View Desktop Version
©2022 Debate.org. All rights reserved.