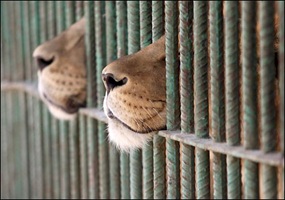 Should we keep animals in zoos?

Zoology, zoos, Animation, Animal rights, animals
Should we keep animals in zoos?
34% Say Yes
66% Say No
Load More Arguments
Leave a comment...
(Maximum 900 words)
Anonymous says2013-04-21T12:28:28.400
Report Post
Hello i think zoos shouldnt be shut down
Anonymous says2013-05-01T16:48:31.460
Report Post
I dont think Zoo's should be shut down either but they are treating the animals like crap they are putting them in small cages or glass places to people can watch them and be entertained why would you do that its just messed up
Anonymous says2013-05-02T17:19:15.537
Report Post
The zoos are mean to animals
Bullish says2013-05-04T02:13:43.277
Report Post
Ehh. I wouldn't mingd to be in an Alien Sentient zoo as long as they treat me nicely.
Anonymous says2013-05-20T02:03:34.857
Report Post
I agree. They are taken away from their natural habitat :(
wildwhatwild says2013-06-06T00:59:07.087
Report Post
Zoo animals are mostly born into captivity difficult to take an animal out of its natural habitat when its never been their..Many other organisations and people infact countless people are more mean to animals than zoos.. Hey iam a good modern zoo i feed and clean and care for my animals give then a naturalistic purpose built enclosure with 24hour care and often support the species in the wild hey thats really mean especially compared to places that skin animals alive exploit them abuse them dont feed them or not care for them at all like in many peoples back yards in every first world county... Hey people get some perspective
Anonymous says2013-09-23T15:27:46.417
Report Post
I think they die faster out there cuz they kill each other and its not right excipt that the polar bear should stay in the cold weather
humanrox says2014-02-22T08:37:09.637
Report Post
Animals in the zoos gobble up money that can be used for schools, leisure centers and even hospitals!!! Due to the aging society, country cannot spare money for the beasts anymore!!! We need more health care!! Who would choose to save a brute than your sick grandmother??? Only a dumb would make the wrong choice. I am sure people here are smart enough to understand.
charlotte040304 says2017-05-19T15:25:30.157
Report Post
Hello
charlotte040304 says2017-05-19T17:17:08.593
Report Post
I believe that we should keep specific animals in zoos and this can save a species from extinction which could be catastrophic for our eco system as well as this it brings education for all generations. Contrary to this not all animals and kept in horrid environments. This is why I believe we need zoos to help keep the world going.
A_DUUUDDDD0 says2018-01-10T19:03:19.470
Report Post
A DUUUUUUDDDD They should be in zoos they keep them save
A_Person_101 says2018-04-19T15:34:42.753
Report Post
Ok first of all I am sick and tired of all of you saying the same thing you guys can't literally come up with your own stuff its not a prison or just straight up a cell Some animals like it there and you guys literally think that every single animal hates it there for example the global warming its getting rid of antarctica or the penguins "habitat" It's literally not the humans fault for that and what about natural disasters Tornadoes or hurricanes or anything like that and they get rid of the habitats and everyone just thinks that its "oh its the humans fault for that" You guys are a straight up disgrace for thinking that animals hate it at the zoo at my cities zoo they dont hate it there so you guys are acting like a stereo type for animals at the zoo Because not all animals hate it there its just your dumb mind for thinking that sorry, But its true you guys just think that animals don't like it there but think of the animals that do because they sure in the hell don't want to get hunted.
brianmcn says2019-09-16T22:29:52.617
Report Post
Animals should only be allowed in their natural habitats.
2e says2020-02-13T15:05:06.097
Report Post
Yes i believe We schould play fortnite during school. I tottaly agree
Privacy Policy | Terms of Use
Sitemap | View Desktop Version
©2022 Debate.org. All rights reserved.