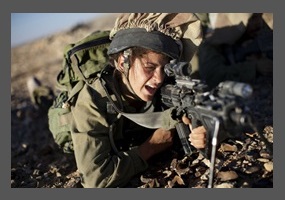 Should women be allowed to serve in equal combat roles in armed forces?

United States, Pentagon, gender, Leon Panetta, women in military, United States Department of Defense, women in combat
Should women be allowed to serve in equal combat roles in armed forces?
59% Say Yes
41% Say No
Load More Arguments
Leave a comment...
(Maximum 900 words)
Anonymous says2013-03-07T02:17:11.233
Report Post
Yes they should. I don't think should be an issue, it's 2013! America is known for EQUALITY AND FREEDOM. The THOUGHT of women not being allowed to be in combat, definitely doesn't equal to me...
Anonymous says2013-03-29T18:00:51.113
Report Post
Okay let's do it, but make the requirements for both male and female exactly the same, always.
Anonymous says2013-05-09T13:33:25.110
Report Post
Women have just as equal rights as men, just because they have a defferent body parts doesn't mean they aren't just like us men.
Nolan Hale
Anonymous says2013-05-10T12:20:20.123
Report Post
Women have equal rights. Thats all i have to say
Anonymous says2013-05-17T04:22:49.063
Report Post
I don't think it's a good idea. I am all for equality but it doesn't seem logical to me to have women in combat. There are other important roles in the military they can fill. If a woman gets injured men will most likely go to help her and it puts the mission at risk. Also what about if they bring back the draft I don't want to see people's daughters or mothers getting killed. Finally how about the hazing that's a problem in the military. If they are going to have women on the frontlines then they should be on all women units or something. If I was a woman I would not want to be around a bunch of men who haven't had sex in a while. Believe me their are some sick people in the military. Sexual assaults will probably rise. Women have higher pain tolerance than men but they are not as physically strong mentally they are our equal.. I believe the should be in support roles.
Anonymous says2013-06-04T15:38:28.767
Report Post
I believe that women should have the right to serve in the same roles, but only if they can demonstrate the same aptitude. No more of this lowering the bar nonsense. The fact of the matter is that there are biological differences, and the women are always going to have to work harder than the men to keep up. If they're willing to put in that extra effort, I have no problem with them serving. But if you're just another woman trying to pretend to be a man, then I suggest you find something else to do, and rethink your definition of equality.
Quan says2013-06-04T17:34:02.933
Report Post
Only if they can demonstrate the same aptitude as the men. No more of this lowering the bar to encourage diversity nonsense. The simple fact is men and women are biologically different. The average women will have to work much harder then the average man to keep up. If they're willing to put in that extra effort, then I have no problem with women in combat roles. If they just want to pretend to be men, then they should find work elsewhere where they won't be endangering lives.
Anonymous says2013-06-10T20:29:55.323
Report Post
The reason they shouldn't I think is the psychological effect it can have on men who they are fighting with. However remember women have lower fitness standards they need to pass to get in, which by default means they are, on average, less suitable. If they have the same fitness requirements as men then I think they should be able to join.
brant.merrell says2013-10-19T03:06:59.443
Report Post
Am I the only one getting sick of all the anonymous posters on this question?
ESocialBookworm says2014-02-12T21:29:45.200
Report Post
We all know why those people chose no...