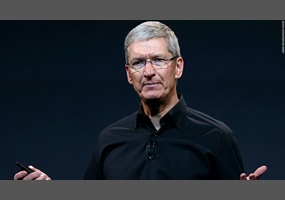 Tim Cook takes a pay cut: Should Apple pay Cook based on performance?