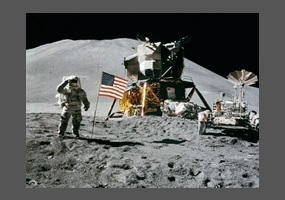 There are 100 mirrors placed around the landing site.
Http://science.Nasa.Gov/science-news/science-at-nasa/2004/21jul_llr/

Reflect on that!
Anonymous says2013-07-24T14:51:57.793
Report Post
And American discredit the North Koreans for believing that the first time he bowled, Kim Jong-il scored a perfect 300, according to North Korean media. Similarly, in his first-ever round of golf, he had five hole-in one holes for 38-under par round. As a Computer scientist, my opinion is "! Depends which side of the divide you lay! Would a Gov?Politician lie!!! :} Also given the extent in technology boom in the last 44 years, a trip to the moon should be of low expense and we should be going every week and at ten times the speed, quantum physics permitting of course....."
KingDebater says2013-12-02T17:38:13.217
Report Post
Woah I made it to the bottom
bigdred says2013-12-26T02:09:06.277
Report Post
Unfortunately too many people use simplistic concepts like "the flag was blowing" and "there are no stars" as evidence that humans havent set foot on the Moon... But those types of arguments are too easy to counter. In turn, skeptics need to educate themselves on valid arguments for the opposition that cannot be countered.

It is pretty easy to dismiss the photography and videotapes. Hell, NASA has already dismissed them... And the original tapes no longer exist, so there is no way to verify if a photo of video footage was or was not altered. The science behind the missions is the best argument though it can not be validated until another country goes to the Moon. Space radiation, the lack of strong enough computer technology to safely get humans there and back, the lack of any issues with gravity regarding people, the spacecrafts, and the rover.... These things will be best validated when another country lands on the Moon and responds "how come NASA didnt experience any of the same troubles we did?"

But the most important of all arguments...... What was the point? There was a reason for the first mission... The US wanted to beat the Russians. They wanted to show their power. They wanted to prove a point. But what was the point for 6 different manned missions that landed, and the other handful that didnt? Especially after all the issues with Apollo 13, it is absurd that NASA spent so much money and risked so much human life to go to the Moon with humans so many times... Just to collect things that could have been done with automated machines. What was the point in taking the rover? To show the world that astronauts were able to drive around on the Moon?? What would have happened if the rover failed when they were too far away from the ship, or they got lost? It is a bunch of nonsense honestly. One mission would have sufficed to show the world that NASA could do what they did. But when you have all of these other missions, with people running around on the Moon with the sun reflecting off of their visors, driving a rover (with NO FOOTAGE of the rover being unloaded and setup), and ships blowing up and malfunctioning... What is the justification for NASA having sent so many humans to the Moon..... When they now say "its too risky"?

If it is too risky now, it was too risky for all of the other missions. One mission made sense.... But all of the other missions.... Pointless. Rocks can be collected with automated machines. Pictures can be taken with automated machines. Having a human on the Moon did nothing for science other than say "hey, look... We did it". For that reason alone, it is easy to see why the missions could have been faked.

If you believe they landed on the Moon.... Then spend some time reading the evidence that they didnt. If you believe they didnt... Then spend some time reading the evidence that they did. Then make an educated decision based on the evidence, instead of just believing what you have been told. Because if you say "the flag isnt blowing" as your evidence that they didnt, then you are easily countered. And if you say "why would the government lie?" as your evidence that they did, then you are easily countered. Those arguments are pointless.
Lanceyx says2014-01-10T07:28:35.453
Report Post
I loved my commodore 64 when I was young I also had Apollo 18 simulator on it. When I played this game I could never land on the moon I kept crashing, Most people should understand the calculations on landing a lunar module on the surface of the moon are very advanced and that's why most astronauts are mathematicians to. People stating it is easy to land on the moon is very silly to say. I like this quote by a president. We do things not because they are easy but because they are hard.
hawaiiguy says2014-07-17T17:41:20.650
Report Post
People say we did it to beat the Russians, yet few realize we used the Saturn V rocket, a Russian Rocket to supposedly get there! That the rocket is 10x's smaller than whats actually required when a physicist does the math is another issue entirely. The lunar module alone required a 400'+ rocket fuel supply, and actuator fuel ports to keep the module from crashing to the moon, of which it had none.
Privacy Policy | Terms of Use
Sitemap | View Desktop Version
©2022 Debate.org. All rights reserved.