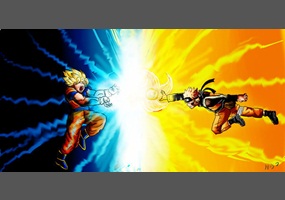 Would Naruto beat Goku in a fight?

Speed Comparison (Naruto = Massively Hypersonic+ [Mach 1000-8810.2]
vs. Goku = MFTL+ = 1000x faster the speed of light... ONE THOUSAND TIMES... That's damn near instantaneous and we are not counting teleportation and transport, we are only counting physical speed..)

Destructive Force Comparison (Naruto = Moon Buster+ [Half of earth.. Which is freaking impressive actually.. However it is still not enough].
Goku = UNIVERSAL BUSTER+ <-- This is not an overexaggeration..
Http://vsbattles.Wikia.Com/wiki/Goku <-- Source for Goku

And I wasn't under exaggerating the speed of Naruto either..
Http://vsbattles.Wikia.Com/wiki/Naruto_Uzumaki <-- Source for Naruto

Now I'm actually not sure if these are facts are not, so lets not jump to conclusions like "these are theoried calculations they are not accurate" They are calculations.. They are not supposed to be accurate unless they actually got the sources from Akira Toriyama HIMSELF.

How did I come to this conclusion? Simple;

Basically It would be this:

Let TSO be the minimum damage.
Smoking in at 15 megatons of force (or 15 MILLION tons)

"So how many times stronger is BBK 100x is against TSO?"

We get 1 Million.. Which is what I stated earlier..